You are here: Home / Uncategorized / Why You Should Not Be Afraid of Failure

How does a high jumper know how high he can jump?  He keeps moving the bar up until he knocks it down.  Knocking that bar down is technically a failure.  He did not succeed in the goal he had of clearing that bar. 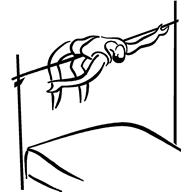 I have two boys.  They are 7 and 5.  I love them dearly, but they are not great basketball players.  My oldest, Brady (check out his website here) looks so awkward when he shoots it makes me laugh every time!  Now, I know he still have a lot to learn, but could I save him a lot of time and energy by telling him to stop playing now?  I hope you are thinking right about now that the logic I just typed is crazy.  Of course it is crazy.  You would never tell a child anything other than, “Keep practicing, you’ll get better!”

Why are you any different?  It is time to take some of your own advise.  Realize that the best were not the best when they started.  They kept practicing.  They got better everyday.  You will too.  There is nothing to fear in failure.  We have all been there, and hopefully will keep going there.  You will never know how great you can be until you raise that bar higher.

One way I try to ignore the fear of failure is to think what the worst case scenario would be.  Vocalize what the worst case is if you failed at what you are thinking about doing.  Will your family start hating you?  Will God disown you and turn His back on you?  Will you physically die?  The answer to all of those questions is most certainly no.  So, stop being afraid of a potential failure and ship it.

What is something that you have failed at, that made you better?